Yes, this is a parody of YES ON PROP 8 commercials. I'm not going to link to their evil. But I think you can figure out their arguments from the parody version.
Posted by Glenn Ingersoll at 11:57 AM 2 comments: Links to this post 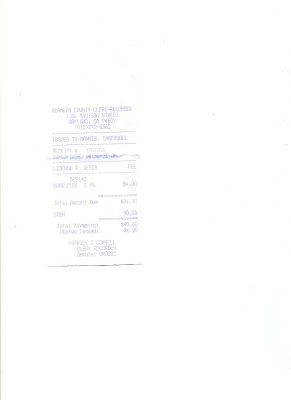 Posted by Glenn Ingersoll at 3:09 PM 5 comments: Links to this post

All their marriages should be destroyed!
Posted by Glenn Ingersoll at 11:25 AM 3 comments: Links to this post

I asked Kent to bring his digital camera to Poetry & Pizza last Friday, the camera that took the great whale movies, and use it to capture me reading a short poem or two. I'd intended to bring a tape recorder but forgot. I wish we had a nice digital audio recorder ...

So Kent set up and got some video of me telling people to settle down we're just about to start, then several exciting seconds of my back as I fiddled with the amp trying to rid it of that weird waah it often adds to the vocal. I'm the only one of our technologically challenged crew who has the courage to twist a few dials -- courage but little understanding.

Of the three short clips Kent captured before the camera decided it was full (no reason for it to be) the one of my announcing the readers (Glenn Ingersoll, Mel C. Thompson, and H.D. Moe) is the only one I'm going to post. No, there's no substance to it, but it's short.
Posted by Glenn Ingersoll at 11:47 AM No comments: Links to this post

POETRY & PIZZA meets the first Friday of each month
at Escape from New York Pizza, 333 Bush at Montgomery
(Montgomery BART or Sutter/Stockton Parking Garage)
in downtown San Francisco and offers free pizza to all comers.

Donations of $5 benefit an organization of the poets’ choice.
This reading benefits SAN FRANCISCO FREE CLINIC.

GLENN INGERSOLL’s poems have been seen in Exquisite Corpse, Prairie Schooner, and Snow Monkey, and online at 3rd Muse, Siren, and Tryst, work is forthcoming in Shampoo. He maintains two blogs, LoveSettlement and Dare I Read. Ingersoll lives in Berkeley and works for the Berkeley Public Library. He is one of the coordinators of Poetry & Pizza.

H. D. MOE is an experimental Poet/Philosopher, who has over 30 books published, including "Plug In The Electric Dictionary" - Community Press; "Muse News" - City Lights; "Bean Trip" - Canterbury Press; "Only A Cage Should Be In A Cage"- We Press; "Jazz Pajamas" - Mother's Hen Press; "Blackwidow Vitamins" - Coo-Coo Clock TV Press; "Wingéd Wows" is his latest book. Some of Moe’s Poems have been translated (an almost impossible adventure) into French, Portuguese & Russian.
For 13 years H.D. Moe published “Love Lights, The Erotic Poetry/Art Newspaper of San Francisco”. Currently, H.D. Moe edits "The Berkeley Review Of Books", and gives talks on women Philosophers at Humanist Hall in Oakland. He also coordinates the "Living Philosophers Forum" at The North Berkeley Senior Center in Berkeley. Be sure to check out his website: www.hdmoe.com

MEL C. THOMPSON was born in 1959 in Los Angeles County. He was raised in the suburbs of North Orange County, California. Thompson began as a songwriter but switched to poetry, then he moved to the Bay Area and founded Cyborg Productions, a well-known underground press of the early 1990s. His own work has been published in mainstream and small press magazines such as the SF Bay Guardian, The Chiron Review, The Haight Ashbury Literary Journal and Lynx Eye.
Thompson’s civil rights work for free speech and his legal work for California workers has been noticed by USA Today, The Los Angeles Times, NPR Radio, Canadian Public Broadcasting and KRON Television. For a time he was a radio personality and musical performer on KMEL.

SAN FRANCISCO FREE CLINIC, 4900 California Street, provides comprehensive medical services at no charge. It is a training site for medical students and residents from programs throughout the country. The SF Free Clinic exists because over 150 physicians pool time, medications, supplies, equipment, and funds. Services include cancer and heart disease screening, diabetes care, childhood and adult vaccinations, and family planning and contraceptive counseling.

Pizza is Free, Poetry is Priceless
Posted by Glenn Ingersoll at 11:29 AM No comments: Links to this post