That COLD storm that came in Sunday ... if it's really just people that give you the bug why is it I get the bug when the miserable winter storm comes in? True, we did go to a play in SF on Sunday so I was around people so I can't say I was just walking about in the rain out of human breath range. But, it always seems to come in with the storm.

I've been dosing with vitamin C and zinc and maybe that's helped. I don't know. I'm coughy. Probably slightly feverish. I always like the husky voice I get.
Posted by Glenn Ingersoll at 10:05 PM No comments: Links to this post

We had a pleasant Thanksgiving dinner at the home of a friend. He lives up the hill here in Berkeley. Lovely weather, great view of the SF Bay. We saw the sun go down. It went down fast. Ploop! Then the lights of the city coming up as the dusk settled in.

Back home we watched another DVD's worth of Queer as Folk. The drugstore at the corner has a rental library so once in awhile we grab something there. It being a long quiet weekend (& getting cold!) I thought it would be as good a time as any to sit before the flicker for a few hours. Queer as Folk is often kinda dumb but if you want to see gay folk you don't have a lot to choose from. And I don't mind dumb if there are compensations -- boys kissing boys, giant monsters tearing down buildings, whatever.
Posted by Glenn Ingersoll at 4:49 PM No comments: Links to this post 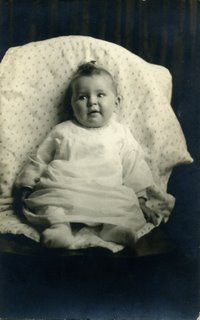 I bought a scanner yesterday. I've only scanned in four photographs. I don't know. Delving into the past makes me uncomfortable for some reason. But the scanner is easy to use, especially since I've just let it choose its own settings and, so far, those have looked good. It's not like I'm going to throw the photos away after I've scanned them; I can always scan them again using different settings or the next generation scanner. The goal is to get all the old family photos scanned then burned to CDs and sent off to those (still alive) who are in them. A good Christmas present?

Today's photo is Mom's baby portrait. The baby looks too old for this to be a birth announcement. How old do you think she is? A couple months? Mom was born November 9, 1921. The picture was taken by a professional photographer, I think it's safe to say. There were actually two copies of this photo in the photo album. It's a postcard print ("postcard" printed on the back).
Posted by Glenn Ingersoll at 10:56 AM No comments: Links to this post

So Jack Martin submitted a manuscript to a publishing contest. The loss included the consolation of a personal response from the editor of the press. Unfortunately, after comparing notes with friends who entered the same contest, Jack has decided there isn't much personal about the response. He reproduces it on his blog.

And here's what I did to it:

Okay, enough about my work is frightening that I will leave my desk evenings in a cold sweat that smells not of lavender but of a bluish citrus, while your work collects its shivers but puts them in wholly original drawers, which are locked each by a separate key, none of which seem to have been included with the manuscript beautifully realized though the adjoining coinboxes are. The manuscript in parts is thoughtful, smart, and often absorbing spilled coffee, which, for my money, makes it especially smart but, oddly, unintriguing. Your voice is wise for acre upon acre and the gerbils which overran it shat primarily on wonder. That said, I feel that you can be more rigorous in your mortis considering that the music in it avoids closing down its upper jaw even when there is an obvious fleck of spinach stuck to a bicuspid. Among orphic utterances, I understand, you are making choices, but for my taste, your choices aren't exactly bleu cheese. Some of the poems do not live up to the exceptional doorprize I got at last night's spaghetti feed. I suggest that you buy products containing only trace amounts of corn syrup.
Posted by Glenn Ingersoll at 11:35 AM No comments: Links to this post

It's nice not to be depressed about the results of an election. Whether my big investment in the race(s) did anything beyond give me a warm glow, who knows, but that glow turned to a happy little sizzle on Nov 7. Of Jim Webb's uphill Virginia campaign (Webb being a former Reagan cabinet official, I had/have little expectation of agreeing with him on much), I said, "What's [my five dollars] gonna get him? A Senate seat?" Considering the razor thin margin of his victory it kinda did.

And going into the election I was sure all the anti-marriage ballot measures would pass easily. Even those that looked possible to defeat when you were poring over the polling had, up to now, passed easily. And this time 7 of 8 passed. But some of them were actually close votes. And one was defeated. The first defeat of an anti-marriage ballot measure. We got a win! Wow.
Posted by Glenn Ingersoll at 12:11 PM No comments: Links to this post 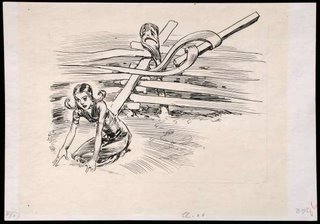 I just got an email from the Oz Club. Ooh. Oz Club being techy. How'd that happen?

The email directs one's attention to an auction of children's lit (much of it Oz) from the collection of Henry S. Blossom. I remember having heard of Blossom as the author of one of the first Oz sequels published by a fan, The Blue Emperor of Oz. I was told it's not a bad book. I can't say for myself. Haven't had opportunity to read it.

One of the items up for bid is an original ink drawing by John R. Neill. Neill illustrated all the Oz books written by L. Frank Baum (after Wizard) and all the sequels authored by Ruth Plumly Thompson after Baum's death. Neill also wrote & illustrated three Oz books after Thompson retired from the series.

Neill's first few Oz books were beautifully done, with Dorothy and the Wizard in Oz and The Emerald City of Oz featuring fine color paintings. As the years wore on Neill's work begins to look lazy to me, even sloppy, as though he grew bored with Oz and figured he could whip out the illos for the undemanding Oz audience then get back to something important.

When at last he had opportunity to create illustrations for his own stories you can see Neill take the books seriously again. Wonder City of Oz contains some of my favorite Neill pictures, including a wild drawing of two houses fighting while the Town Crier stands nearby sobbing into a handkerchief. The drawing up for sale is one of Jenny Jump, a character Neill created, being threatened by an animate fence. It's kind of scary, actually. It shows what Neill could do when he was interested in what he was doing.
Posted by Glenn Ingersoll at 10:51 AM No comments: Links to this post 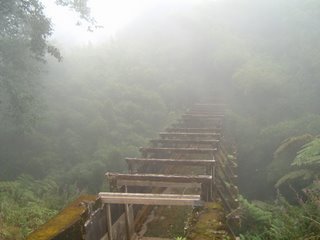 Just back from two weeks in Hawaii. On our last full day we drove up to Kohala and took a hike in the Kohala Forest Preserve. Officially the trail was closed. Earthquake damage. However, anybody who can climb the locked gate can negotiate the trail, even in its current state. Which is not good. Big cracks running through the trail itself, hunks of the embankment collapsed onto the trail, the occasional tree toppled that one must climb over (or duck under). The goal was an overlook to the Waipio Valley, a steep-sided valley that ends at the sea. When we got there the valley was masked by clouds. There were a few dim windows to the wall of the valley opposite but even those closed up while we waited.

The trail follows an irrigation ditch much of the way. There were places embankment had tumbled into the ditch. But these rubble dams would not have stopped the water had water been flowing. Last year we tried to take a Flumin' da Ditch tour that floats canoes down these slow-moving old ditches dug a century ago for the sugar cane plantations. We were rained out, the water too high to allow clearance through tunnels. The earthquake end of October (week before our trip) seems to have killed the irrigation system entirely. No more tours, no more water for crops. Sugar cane production was pretty much uneconomic on the Big Island anyway ... Still, sorry to see the end of that and the canoe tours. There already was very little local industry.

The photo is of one of the flumes we passed. The boards are damp but no water runs.
Posted by Glenn Ingersoll at 9:55 PM No comments: Links to this post