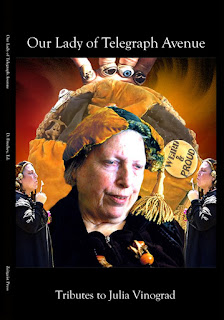 A release party for Julia Vinograd’s first posthumous collection, A Symphony for Broken Instruments, and an anthology celebrating her life and work, Our Lady of Telegraph Avenue, happened on 2pm, October 20th at Himalayan Flavors, 1585 University Ave. in Berkeley, California.

Zeigeist Press publisher Bruce Isaacson is responsible for putting together A Symphony for Broken Instruments, a selected works with a section of previously unpublished poems. The book is 384 pages total, including art by Deborah Vinograd and Chris Trian. At the same event, editor Deborah Fruchey presented Our Lady of Telegraph Avenue, full of tributes (poetry & prose) to, for, and about Julia Vinograd by a slew of friends and local writers.

The above is an edited version of what appears on the Zeitgeist Press website.

My poem, “Old Blues,” appears in Our Lady of Telegraph Avenue, p. 54 - 55. “Old Blues” uses one of Julia’s recurring characters, although he isn’t actually in the poem, rather other characters (Very Thick Blacks, Vicious Violet, etc.) wonder where he’s gotten off to.

I wanted to write something for Julia, and I thought it would be nice if it was included in the announced anthology. I considered reviewing my history with Julia, such as it was, meeting her first at a reading she gave at a Berkeley Senior Center the week I moved to Berkeley, buying each of her new books as it came out, selling her a chapbook which she praised. But that stuff wasn’t resolving into a poem. So I pulled out my personal anthology and reread poems of hers I had copied out. What did I like about her poems? One thing I liked was the way Julia Vinograd wrote about music, her wild metaphors creating a separate musical world instead of using music-related terms and concentrating on the instrument. It was a sort of grounded surrealism, grounded in that she was digging into the music to bring out feelings and images, rather than spinning words purely out of headspace. Maybe I could try something similar? I love using wild metaphors in my own poems.

Here’s a stanza from “Old Blues”:

Old Blues is on the bus! announces Vicious Violet.
She slaps a bus schedule on the table like a trump card.
He’s playing for the missing,
that horn of his calling out all the stops,
horning in on the dreams
travelers are trying to settle down in,
vibrating their thighs,
unzipping their duffel bags to air out
the musky little tales they keep in a curl.

Both books, Symphony for Broken Instruments and Our Lady of Telegraph Avenue: tributes to Julia Vinograd, are published by Zeitgeist Press and are available from their website.

Posted by Glenn Ingersoll at 11:29 AM No comments: Links to this post

"Big Cloud" in The Pangolin Review

“Big Cloud”
has posted at
The Pangolin Review
issue #13
Posted by Glenn Ingersoll at 10:27 AM No comments: Links to this post

“Holding Your Hand” at Rusty Truck

“Holding Your Hand”
has posted at
Rusty Truck
Posted by Glenn Ingersoll at 7:57 PM No comments: Links to this post

[my bio, among the others]
Posted by Glenn Ingersoll at 9:21 PM No comments: Links to this post