The latest Bindweed anthology, Devil’s Guts, which includes my poem ““enveloped by hurricanes’ thinking elephant” is now available from lulu.com 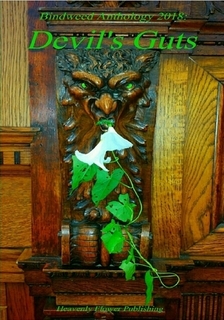 “My mother pinned a rose on me”
“Looking for trouble”
“Look at a flower”
“Let’s go”
Posted by Glenn Ingersoll at 1:58 PM No comments: Links to this post

Caveat Lector features three excerpts from Autobiography of a Book

Three excerpts from Autobiography of a Book appear in the Spring 2019, v. 29 no. 2, issue of Caveat Lector.

They appear under the Essay heading, introduced by a note I wrote to give a reader a sense of what Book is up to.

Here’s a direct link to the excerpts: link
Posted by Glenn Ingersoll at 3:32 PM No comments: Links to this post 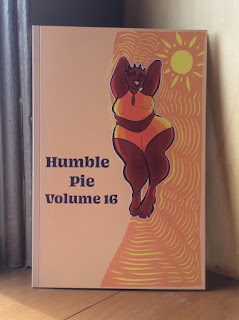 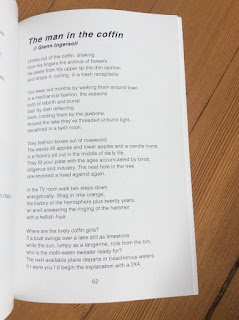 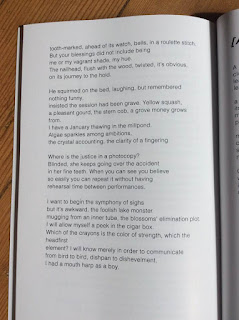 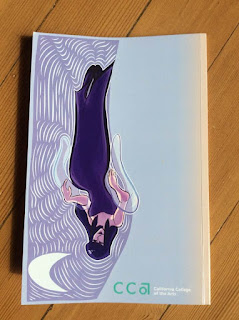 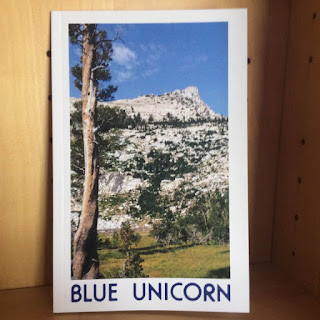 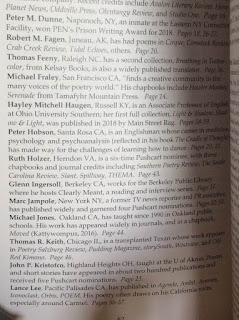 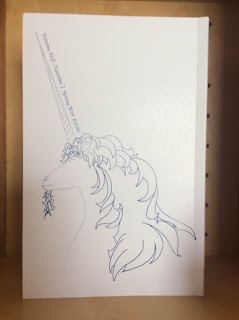 Posted by Glenn Ingersoll at 3:45 PM No comments: Links to this post

Reading with Babar-in-Exile at Octopus on 5/9/19

I will be reading with Babar-in-Exile this coming Thursday. Here’s the announcement from their website:

Babar in Exile celebrates its FOURTH BIRTHDAY (!!) with a romp through the minds of light-struck poets (and maybe some cake). For our 18th installment, we are excited to feature two former and very active participants of Café Babar and Poetry above Paradise series of the 1990’s who have been in the poetry trenches ever since. Blogger and poet Glenn Ingersoll currently runs the reading and interview series Clearly Meant at the Berkeley Public Library. And mental health advocate and multi-genre writer Deborah Fruchey is hard at work editing an anthology of tribute poetry to Julia Vinograd for Zeitgeist Press. As well we welcome “honorary Babarian” Yume Kim, a perspective-challenging SF poet who will feel right at home with these rad oldsters.

So come on down to check out a slice of Bay Area poetry history, now and in the making, and make your way home with a bindle full of inspiration and a thimbleful more hope for the species.

and you, in our infamous open mic

free of charge and oppression

Glenn Ingersoll hit the scene back in the 90s when Cafe Babar and Poetry Above Paradise were hot, and snagged features at both places. Where fame went after that is hard to say. Currently Ingersoll works for the Berkeley Public Library where he hosts Clearly Meant, a reading & interview series. He keeps two blogs, LoveSettlement and Dare I Read. He has two chapbooks, City Walks (broken boulder) and Fact (Avantacular). Recent work is in Sparkle + Blink, Mary, The Walrus, and Caveat Lector. The multi-volume prose beast, Thousand, is on its way from MCT Publishing.

Deborah Fruchey tried to write her first book at the age of 8. She went by the name Debralee Pagan for a while, but people still mispronounced it, so she gave up. Her first novel was chosen as a Best Book by the American Bookseller’s Association, and her manual on mental illness was once described as “The best book of its kind.” Her latest is a volume of flash fiction called Priestess of Secrets. All of her work is available on Amazon. Deborah has spent too much of her life in churches, psych wards, and poetry readings, and has appeared in 10 anthologies. She is the editor of the coming anthology in tribute to Julia Vinograd, from Zeitgeist Press - you are invited to contribute! Her ambition is to acquire a cult following and a flat stomach. If she can’t have that, she would settle for never receiving a robocall ever again!

Yume Kim lives in San Francisco but commutes to South Bay for tutoring/teaching. She is a grad  recipient of both an MA in English and an MFA in Creative Writing from San Francisco State University. She is also a Kundiman fellow recipient from Fordham University. Her forthcoming chapbook (title TBA) will be published by Nomadic Press sometime this year.

“The man in the coffin” in Humble Pie

The Spring 2019 issue of Humble Pie, a literary magazine of the California College of the Arts in Oakland, is including my poem, “The man in the coffin.”

I am going to be at the publication reading tomorrow night, May 7, 8pm at the A2 Cafe on the CCA campus, 5212 Broadway (at the foot of College Ave). There will be free pie. See you there! 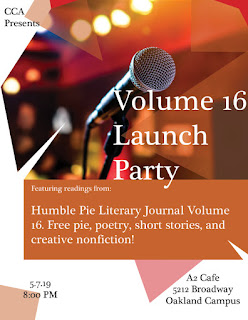 Posted by Glenn Ingersoll at 7:20 PM No comments: Links to this post

"had enough of want some make” and “anything that ends”

appear in the March/April issue of Scarlet Leaf Review.
Posted by Glenn Ingersoll at 10:21 PM No comments: Links to this post