Here's a link to an AP report. It's three minutes long, audio & slideshow. Charles Hanley has returned after a year away from the country. Misleadingly the report is titled, "Reporter sees little change in Iraq since last year." Yes, all the concerns are about the same -- lack of security, electricity, government. But progressive degeneration is change. And there's been a lot of it over the year Hanley was elsewhere.

"More grim gray blast barriers, more checkpoints, more nervousness ... car bombings, deathsquads, kidnappings, escaping to Syria or Jordan ... two US soldiers are missing, captive ... last year two US soldiers were missing ... the headlines are all the same ... Shiite & Sunni deathsquads have cleaned neighborhoods of the other sects ... 110 degree heat ... no air conditioning, refrigerators become cupboards ... the US army is stronger than before but more than 600,000 refugees have joined the 1,000,000 already out of the country." [some paraphrasing]
Posted by Glenn Ingersoll at 10:59 AM No comments:

I was writing steadily on Dare I Read. Then I stopped. This seems to be my style. Regular, steady writing. Then a pause. Not always planned. I never know how long the pause will last but it rarely drags on. I don’t get that scare, that feeling I’m never going to write again.

This week I added a stats service to LoveSettlement. It’s all the way at the bottom of the page. Open to anybody who wants to click. When I first looked at the stats I was startled to see my average reader spending 3 1/2 minutes on the site. It didn’t take long to figure out that my average reader was me. I will open the blog and leave it up while I’m writing a new post or searching the web, so the stats show a “visitor” hanging around for a half hour. Average that across a few visitors who somehow manage to stop in for 0.00 seconds and you get a … you get what I saw.

I’ve had three visitors over the last three days (yup, one a day) who have actually stayed long enough to read something. The visitor today was reading posts from 2004, having followed a Google search result to the blog. Yesterday’s visitor had followed a Technorati search. Neither read beyond the post the search led them to. The third visitor got here, I think, via a bookmark, so is probably somebody I know. (Hi!)

A few years ago I set up my poetry site (also called LoveSettlement). I added a counter (how many years has it taken to turn to 7400?) and a free webstats service. I was involved with an online poetry workshop and whenever I posted a new poem or commented on someone else’s I would include a link to my site then would rush to check my stats. Look! I would exult. Readers!

The stats service got buggy at just about the right time. When it failed to load I would feel anxious, frustrated. When at last I removed it I felt more relief than expected. It felt so good, in fact, that I began to hate stats. Nobody reads poetry, right? How could one expect a big readership at a poetry site, especially one by a poet who has never published a book (not counting chapbooks!), never taught a class, has let his push to get his work into magazines (& ezines) subside to an occasional gentle poke in a random direction?

I chose not to pay Homestead to allow me to update my poetry site. So it sits there, still mostly useful. A few of the links are dead, but it’s not quite a graveyard yet. I’m not much interested in the mechanics of making websites. I could do a great deal more to promote myself and my work. Thing is, the writing energizes me, the marketing wearies me.

When asked, “Are you writing?” I answer, “I am always writing.” The Dare I Read project is one that will hit periods where I resist it – it’s a memory project, not just a booklog – but after a rest I know it will come back. I write poems, but rarely post them online. I keep an offline diary, too. There’s a manuscript that started up last fall; it has topped 40 thousand words. It might be close to done. I’m giving it a new read. A novel? A memoir? Something like that.
Posted by Glenn Ingersoll at 12:36 PM 5 comments: 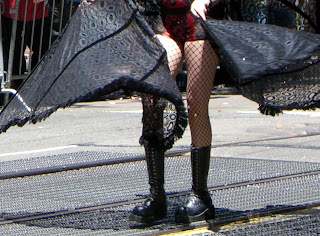 one of Kent's photos from yesterday's SF gay pride parade
Posted by Glenn Ingersoll at 11:23 AM No comments:

I sent poems to Poetry. I haven’t done that in years. Poetry is dedicating its summer months to reading poems by poets who have not yet seen work in their magazine. What a good idea.

Back in 2004 I checked out from the library the 2003 issues of Poetry. There were a handful of decent poems but on the whole I decided if Poetry were poetry I would not read poetry. Many many poems were just bad. At the tail end of 2003 longtime editor Joseph Parisi gave over to Christian Wiman. It seemed to me the few issues I read with Wiman in charge were better than the Parisis. But surely he was working mainly with Parisi’s backlog. I haven’t read an issue of the magazine since.

But one of the parts of my new send-work-out resolution is that when I send poems to a magazine I will try to include a wholly new one, a poem I have written specifically for that magazine. The one I sent Poetry was based on poems they posted on their website. I was thinking I was going to be producing poems somewhat akin to the editor(s)’ aesthetic, the poem thus having a better chance than most to make the cut. I’ve yet to see the result. (Of the three batches I sent out this year not one has seen a reply.) I rather doubt I’ve bettered my odds with these magazine-tailored poems. Who knows? But I do like the challenge; it’s an opportunity to make something new, whatever/wherever it ends up. The poem is my project. I have long since let go of expectation that I will build a poetry career that breaks even, or that brings fame. The poem is the thing, what it does.

Recently I wrote a poem to a generic magazine editor begging to be included in their magazine. I was resisting writing it – absurd subject! Then I remembered, what steps up to be written is what makes it to the page. I’ve learned that my writing is what my writing wants to be. There are all sorts of things I’ve wanted it to be over the years – salable, for instance. And I’ve had plenty of clever ideas for stories or experiments. But what gets written is what wants to be. If the writing is me forcing something into words the writing is going to be abandoned.
Posted by Glenn Ingersoll at 9:34 PM 1 comment:

How long will this post sit here without comments?
Posted by Glenn Ingersoll at 6:35 PM 4 comments:

Rep. Sarah Peake of Provincetown said afterwards that tension was high even for lawmakers, who were unsure of what was going to happen even as they filed into the chamber.

Peake, who is openly lesbian, said that she sat next to Rep. Christine Canavan of Wakefield in the chamber. Canavan had previously backed the amendment [to the Massachusetts constitution, which amendment would have eliminated the opportunity for same sex couples to marry]. As Canavan went to vote, Peake said, “She banged me on the shoulder and said, ‘Rep, watch this,’ and she pushed the ‘no’ button.”

“When I saw her finger hit that red button, it was momentous,” Peake said. “I gave her a big hug and a kiss.”

The Massachusetts legislature was voting on whether to allow the populace to vote in a general election on the proposed marriage-bashing amendment. To move to the general election ballot the amendment needed the votes of only 50 legislators. The amendment lost its chance by a vote of 45-151.
Posted by Glenn Ingersoll at 4:23 PM No comments:

RJ has recently posted short poems at his blog. I left the following response to the one he posted June 4:

I am so common,
filled by wishes used to loneliness,
levers against ever. Elsewhere
a woman looks, and across her
I confess.

The response poem uses the original poem for its words and some of its ideas.
Posted by Glenn Ingersoll at 10:38 AM No comments:

In a post at the blog Very Like a Whale the writer wonders about critiquing, especially in an online workshop then says, “Once a writer has got beyond the usual yeek-cliches-and-abstractions stage and has stopped obssessive-compulsive telling, once they have a good grip on the basics of the craft - what is there to separate one poet from another but the personal taste of the reader? We respond to what we read the way we are. Critiquing others’ work now just seems an exercise in talking about myself. And a rather futile one at that.”

I’ve recently become part of a small poetry group/workshop, having not done such a thing in several years. I find it much easier in person than on line.

When I was heavy into an online poetry workshop I would write comprehensively about the poem, which was a lot of work and, even when appreciated, it was hard to tell what got through to the poet, what mattered to the poet, what was needed, what a waste of time. When I stopped learning through the experience (a big part of why I did it) I shifted to quips — making quick comments about a particular piece of a poem, praising a sharp metaphor or chiding a lazy one, for instance.

It’s a relief to be working with two poets face to face who have writing poems 20 or more years whose egos seem not easily bruised. In workshop I go thru the poem top to bottom, giving a reading as best as I understand it, saying what confuses me or delights me as I go along, making general comments about poetic strategies, and summing up with what pleases me most &/or what leaves me unsatisfied. The idea (at least in my mind) is no longer offering fixes for another poet’s work, but exposing to the poet what is going on in this close reader’s mind as he is going through the poem. If the poet sees that his poem is not doing on the page what he thought it was doing perhaps he can see a way to shift it toward doing so. But I’m mindful not to make prescriptions. It’s better for me not to, as then I won’t feel I have some stake in (my view of) the poem’s success.
Posted by Glenn Ingersoll at 10:58 AM No comments: