I wrote the following in response to another blogger’s call for writerly resolutions:

In 2019 I got a first book published (prose or prose poetry). It was pub'd by a tiny press without resources for any kind of marketing. But it’s a handsome book and the publisher is a sweetheart. Figuring out how to get it out into the world has been, well, a hobby ever since.

I like performing so I was going to open mics in our very active SF Bay Area literary scene -- I sold a few copies, I traded for other people’s books (I like trades!) -- but then the pandemic came along. The boxes have been gathering dust. So I've started doing something I always wanted to do -- I'm sending free copies to people I like and admire. I've only sent a few out this way so far. I include a handwritten letter. I am shy about sending to people I don't know personally. But I'm poised to do so. So I will be doing that in 2021.

I have another prose manuscript, and I've been able to place excerpts in a few literary venues. I have gathered almost 150 rejections for excerpts. The full manuscript has been rejected only three times. I will put more energy into getting the manuscript out in 2021.

Then there are all the poems that fill up notebooks. Since 2017 I have been regularly sending out work and rejection no longer feels so crushing. Acceptances happen now and then. Dreams of literary fame continue to haunt my chinks and crannies, of course, because I'm a dreamer. I sent out two poetry submissions before writing this comment. I got one rejection this morning. In my three-person writing group we use: #keepyournumbersup ... So when I'm feeling discouraged I remind myself to put out some of those good poems to places that haven't yet had the opportunity to read them. Every editor is a reader. If I've sent a poem to 20 places, it's been read 20 times, right? I wonder how many readers a published poem gets?

Posted by Glenn Ingersoll at 4:11 PM No comments:

The Books That Shaped Our Year 2020

As a past contributor to Inverse Journal, I was asked to talk about some of the books I read last year. My comments are included along with those of 29 other writers.

The editor of "The Books That Shaped Our Year 2020," Majid Maqbool, says, “As the year comes to an end, we asked Kashmir’s writers, poets, academics, journalists and some of our contributors about the books they’ve managed to read this year. These are books that have resonated and stayed with them, giving them company, educating them about the world, and expanding their knowledge. In an unstable year that mostly confined us indoors due to the raging pandemic, keeping us apart and limiting our travels and mobility, books open new doors of knowledge and insight, in the end making us feel less lonely.  The idea is to share a diverse list of books, across genres, published this year and in earlier years from which our readers can choose and pick something to read as per their taste as they step into a new year.”

This is what I wrote:

Finding Them Gone: Visiting China’s Poets of the Past by Bill Porter / Red Pine

Bill Porter travels around China like a geologist, scratching at its surface modernity to reveal the deep time of its civilization, the continuities of its arts, and the personalities that are still vivid hundreds (thousands?) of years after their life on Earth, all this while negotiating taxi rides, grumping at bad motels, and getting lost in rural villages.

One of the strangest stories ever. For decades the North Korean government kidnapped foreigners and set them up in North Korea as involuntary guests. Why? No one really seems to know. Robert Boynton profiles some Japanese abductees, and puts together evidence that might lead to an explanation, but never quite does.

The Pink Line: Journeys Across the World’s Queer Frontiers by Mark Gevisser

Lesbian, Gay, Bisexual, Queer … South African Mark Gevisser interviews people all over the world to trace the progress (and regression) of rights and liberties among the non-het. The global LGBT rights movement has influenced the way everyone thinks of themselves, it seems, even in societies where there were traditional roles for third gender people. The book’s strength is in the individual stories, whether in Africa, India, or Mexico. These are day to day struggles in contexts that a decade or two ago did not exist.

White Christmas: The Story of an American SongJody Rosen

Posted by Glenn Ingersoll at 5:06 PM No comments:

A quick list of the places that included something of my work in 2020:

Door Is A Jar

now available in a 2-volume edition

(as well as the original 10-vols and the ebook)

plus I finally applied for and got a listing at

And I finally got competent at posting on my blog about publications as they happen.

A chapter from Autobiography of a Book appears in Door Is A Jar #17, winter 2020.

Because Door Is A Jar is mainly a physical publication (or an e-book), rather than an online literary site, I am going to let them have an exclusive.

However, “in which the book has a dream or three” does include three dreams so I’ll tease you with one:

In this dream I am lying on a railroad tie and it is shaking as the train comes down from the mountain. I wonder if the engineer will read me. Perhaps the train will screech to a stop, the engineer will get out, crunch across the gravel. He will reach down, pluck me from where I am lying and brush the dust from my cover with his canvas-gloved hand. Then he will look into me. He will look into me the way he looks down the line, seeing the track stitching the landscape together, looking at how the way has been laid out for him and is always the same and he is always the same and nothing changes but the weather and what gets in the way. The vibrations of the coming train move me. A bird throws its silhouette against the white sky. The train is shaking the earth. Where is it? The sky remains white, and I try to imagine myself its child. I could grow up to be a white white sky.

If you want more, buy the issue!

Or wait for Autobiography of a Book to finally achieve its dream — of being a real, honest-to-goodness book!

Posted by Glenn Ingersoll at 8:27 PM No comments:

Email ThisBlogThis!Share to TwitterShare to FacebookShare to Pinterest
Labels: 2020, Autobiography of a Book, published work

"action is everything that questions seek"

as part of their All Accounts and Mixture series,

an annual online feature celebrating the work of LGBTQIA+ writers and artists.

Posted by Glenn Ingersoll at 3:40 PM No comments: 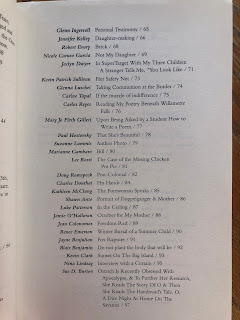 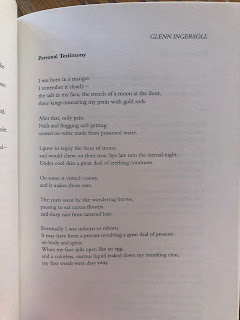 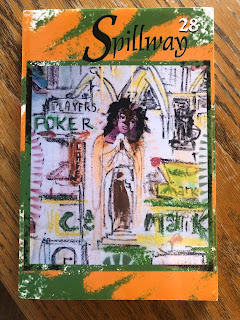 Posted by Glenn Ingersoll at 10:55 AM No comments:

under the auspices of the EP Foster Library

I read via Zoom from my home. Phil Taggart conducted a brief interview afterward, which I enjoyed, but which didn’t get recorded.

Other readings in the series can be accessed via the Askew Poetry Journal youtube channel.

Autobiography of a Book in Ginosko Literary Journal #25

“in which the book takes it back”

“in which the book gets complacent”

“in which the book talks about your book”

It’s a big issue. The Autobiography of a Book chapters appear beginning on page 142.

A word meaning to perceive, understand, realize, come to know; knowledge that has an inception, a progress, an attainment. The recognition of truth from experience.

Posted by Glenn Ingersoll at 8:38 PM No comments:

Email ThisBlogThis!Share to TwitterShare to FacebookShare to Pinterest
Labels: 2020, Autobiography of a Book, published work

“Human Right” as a video

I performed “Human Right” for the Quiet Lightning Virtual Poets-in-Parks reading via Zoom. Yes, that is my home library.
You can compare the performance to the written version of the poem, which I included in my last post.

And if you want to see how my poem fits into the Quiet Lightning experience, you can watch go to youtube for the full playlist.

Posted by Glenn Ingersoll at 9:35 PM No comments:

“Human Right” appears in issue #107 of sPARKLE & bLINK, the magazine for Quiet Lightning. 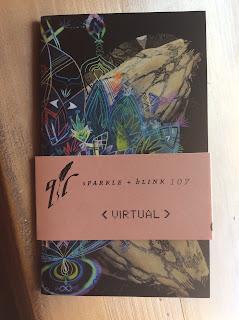 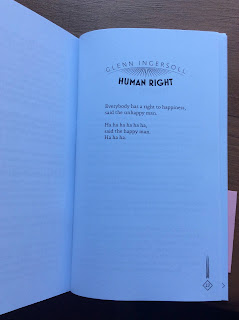 Posted by Glenn Ingersoll at 2:23 PM No comments:

Autobiography of a Book chapters at The Collidescope

The Collidescope features three chapters from Autobiography of a Book.

“in which the book’s title is not named”

“in which the book anticipates a critical shellacking”

“in which the book, having taken some time off to think up something worth saying, accidentally keeps its promises”

The chapters posted on Sept 7, and editor George Salis found fun anthropomorphic book paintings by Jonathan Wolstenholme to accompany them. 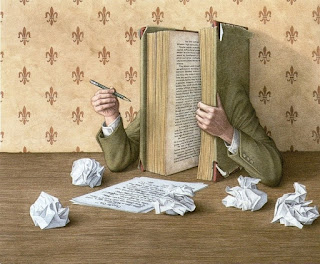 Posted by Glenn Ingersoll at 3:57 PM No comments:

The 6th annual Poetry in Parks!

This is a free event, but RSVP is required. RSVP here: https://app.gopassage.com/events/poetry-in-virtual-parks

All selected authors will be paid and published in sPARKLE & bLINK 107 featuring cover art by Judit Navratil.

If you’d like a copy of the sPARKLE & bLINK book, featuring all selected writing and cover art by Judit Navratil, donate $15 (paypal or venmo); issue 107 will be mailed to you — plus a bonus back issue.

Posted by Glenn Ingersoll at 10:38 AM No comments:

followed by an open mic

under the auspices of the EP Foster Library

the zoom room opens at 7

That makes it easier for me to join them! I will be reading from my Berkeley home.

Posted by Glenn Ingersoll at 11:22 AM No comments:

Check out my listing at Poets & Writers: Glenn Ingersoll

I’ve thought about having a listing at Poets & Writers since I found out there was such a thing. Years and years ago.

Once I even  put together an application packet. I think this was before the internet, when you were required to send pages photocopied from magazines. I never submitted it. I’m not sure why.

Or, wait, was there a Poets & Writers directory pre-internet? I'm not sure. In the internet’s early days P&W could still have wanted the supporting documents hard copy. Literary culture hadn’t exploded online. Few literary magazines had a web presence, let alone posted poems or stories.

I am self-conscious about this sort of thing. Self-promotion vs. letting the work speak for itself. Maybe I didn’t finish the application process because I didn’t feel worthy. Maybe I was afraid the editors would reject the application because the magazines in which my poems had been published were too obscure. Maybe I was afraid that I would expect a listing to have some meaning, some consequence. If I got a listing and nothing came of it, nobody wrote, nobody called — would that hurt my feelings? Or was following through just too much bother? Not worth the cost of postage? Might there have been a charge to be listed back then?

This spring, what with the covid shutdown and the things-to-do list getting a few line-throughs, I looked up the latest version of the directory application. Like I said, I’ve thought about getting listed for years. The application has been made easy. If your stuff is up online — and the venue is one P&W officially recognizes (not “too obscure” or too vanity-press) — you just upload a link. Six links are required. The P&W directory editors review the application, then add your name to their database (or, I guess, don’t).

Once you’re in you can expand the listing with author photo and bio. I see there’s even an option to link to video.

If you have any suggestions for improving the listing, leave me a note in comments below. Or send me an email.

Posted by Glenn Ingersoll at 1:19 PM No comments:

Email ThisBlogThis!Share to TwitterShare to FacebookShare to Pinterest
Labels: 2020, me, published work, why not
Older Posts Home
Subscribe to: Posts (Atom)