I took a class in Arabic from Berkeley Adult School. I won't be able to make next week's class meeting so last night was my last.

I still know no grammar and have very few words, nothing that would be useful in communication. On the other hand I am familiar now with the Arabic alphabet and can sorta kinda sound out a word ... Arabic doesn't have separate letters for vowels (except alif which is an AH) but indicates them with little marks over the consonants. I haven't looked over enough Arabic texts to see for myself but I understand they are perfectly happy to dispense with the vowel marks (like Hebrew, K says).

Another session will start up in November. I took Arabic purely out of curiosity. That curiosity has largely been satisfied. I don't expect to sign up for the November session. I have little interest in Arabic culture or the Middle East. The language's noises are not happy in my mouth. I'm fine with the investment I put into it so far but learning more will have to come with greater need.
Posted by Glenn Ingersoll at 4:57 PM No comments:

throwing money at them

Politics fascinates and depresses me. Not every election year but most I have thrown a few dollars at a candidate or three. $20 to this one, $20 that one. When Harvey Gantt was running against Jesse Helms the first time I dunned coworkers and rounded up fifty or sixty dollars. Ever heard of Senator Gantt?

It's kind of like betting on the lottery. It's not really an investment. You just hope that the government you get is indifferent, occasionally a pleasant surprise, and mostly ignorable. That's what I hope for from Democrats.

So, via ActBlue, I dumped $100 into the Netroots bin. I cringed when I realized I'd given Jim Webb (former Reagan cabinet official) even as much as five bucks but, what the hell, it's only five bucks. What's that gonna get him? A Senator's office?
Posted by Glenn Ingersoll at 10:29 PM No comments:

Posted by Glenn Ingersoll at 8:26 PM No comments: 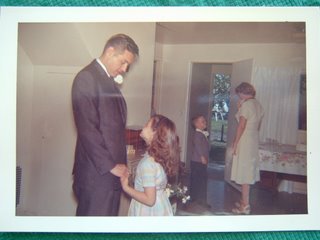 This is a photo of my father and mother on their wedding day. The girl standing by my father is my elder sister. The boy by my mother is the younger of her two new stepsons (& my brother).

I took a picture of this picture using a digital camera. The green framing is the table cloth on which the picture was lying. I would like to have all the old photos digitized and give copies to David and Bernice and whoever wants them. I was thinking I might be able to take digital photos of them all but snapping this photo was difficult ... we could get a scanner or take them to a friend who has a scanner or go to a commercial outfit.

The wedding picture looks posed. I wonder who took it? The eldest son? Possible, since he's not in it. But wouldn't someone else have been there? Other photos show guests. But it looks like it was small affair, not in a church or meeting hall. This was a house. The wedding cake looks tiny on the flowered tablecloth. There are only eight glasses waiting on the table. Nine forks. One wrapped gift on a corner of the table.

Mom's notes give the address. There is no house there now.
Posted by Glenn Ingersoll at 5:13 PM No comments:

But then I still don't get "sentimental" as a criticism.
Posted by Glenn Ingersoll at 10:03 PM No comments:

Our fridge died. We have a back-up fridge. It's upstairs. So we hauled all the food up there. The upstairs fridge is kinda crappy. The freezer doesn't keep ice cream hard, for instance. And one of the shelves is missing. We stopped in today at Home Depot and saw a small fridge for $300, and there was a sign saying any appliance $299 or more included haul-away of the old. Turns out that wasn't the case. Maybe it was some special offer on the particular brand on which the sign hung. When we said we would like the little cheap fridge, the salesman looked dim. I said we had a small space and all the other fridges were big. The one we wanted, it seems, is pick-up only and there was no way we were going to fit it in the Jeep. "Get me the measurements of your space and I will find our smallest, cheapest model that includes removal," he said.

I didn't emphasize cheapness. Should I have taken offense?
Posted by Glenn Ingersoll at 5:27 PM No comments: