Quiet Lightning, the long-running SF Bay Area reading series, had its final regular reading on February 7, 2022. QL hasn’t closed up shop. They are continuing to sponsor special events. It’s just that the monthly (most lately bimonthly) “literary mixtape” is no more.

Quiet Lightning was a new creature on the scene when it debuted. I was used to the standard reading featured two poets and an open mic. Sure, you could find group readings or all-opens or features without opens. But QL curated its readings, that is, if you wanted to read, you had to submit your work ahead of time, and the curators for that month would put together the pieces they wanted in the order they preferred. When you read for them, you were vocalizing the chosen piece. Readers were cautioned not to ramble on about how grateful they were or how they came to write the poem/story/essay. “Just read it and get off the stage.”

I kind of missed the poets apologizing for an unworkshopped poem or shuffling through pages for one that was “right here.” But it was an interesting new idea, a hybrid between a magazine and reading — and you got both.

It took me several tries to get into Quiet Lightning. I bought past issues of Sparkle and Blink, the little magazine that is available at each reading and which includes all the work read on a particular night. I don’t know that they helped me figure out what a “Quiet Lightning poem” was, but judging by what of mine ultimately did get picked, I’d say socially relevant or personal testimony pieces had a leg up. It was nice that they didn't mind if a piece had been previously published. "Personal Testimony" was originally published in Spillway.

Quiet Lightning moved around, every month popping up in a new venue. That was ambitious, but must have been a logistical hassle. "Since December 2009 we've presented 1,790 readings by 960 authors in 146 shows and 119 books, selected by 77 different curators and performed in 91 venues, appearing everywhere from dive bars and art galleries to state parks and national landmarks," QL says. Come the pandemic QL migrated to Zoom, as so many did. Thus the library you see behind me in the video is my own.

Sparkle and Blink #113 is available online.

The readings were all recorded, too. 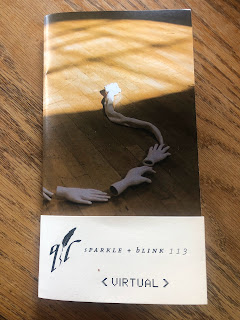 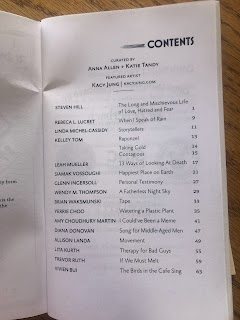 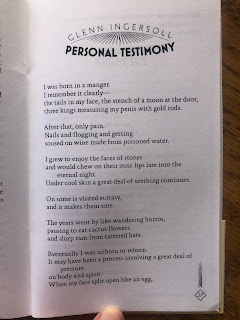 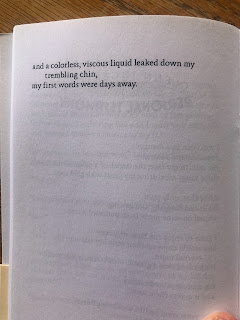 Posted by Glenn Ingersoll at 3:07 PM No comments:

Two chapters of Autobiography of a Book in Cerasus

Two chapters of Autobiography of a Book appear in Cerasus Magazine #4, 2022, edited by John Wilks:

“in which the book looks forward to the mouth, its ruminations, and passage therefrom”

“in which the book, peevish, declares a preference"

Cerasus is a hard copy magazine. There is an ebook option. You can order copies at 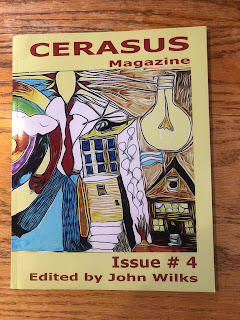 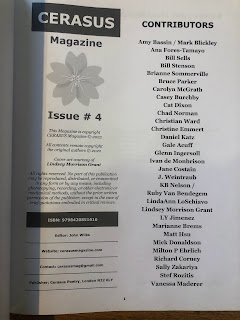 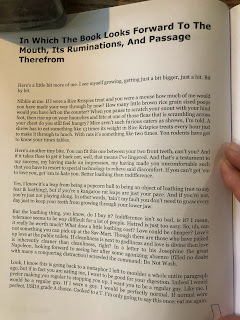 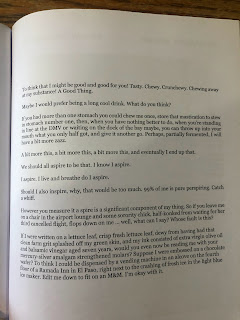 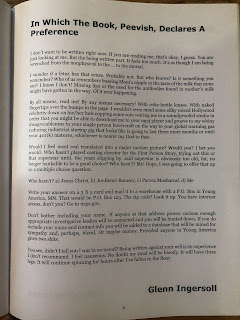 Posted by Glenn Ingersoll at 2:01 PM No comments:

Email ThisBlogThis!Share to TwitterShare to FacebookShare to Pinterest
Labels: 2022, Autobiography of a Book, prose, published work

Forum, the City College of San Francisco literary annual, includes two of my poems, “What Must Be Used Is Readily Available” and “This Tunnel."

On May 25th I participated in a Zoom publication reading. I don’t know if it was recorded. I can’t find a link to video on the Forum website. The issue may yet be posted online, but that isn’t up either. They did announce that they were handing out contributor copies in a pub near the City College campus, so I Barted over. Here are photos of the issue (Spring 2022, vol.14 no.1) and my poems: 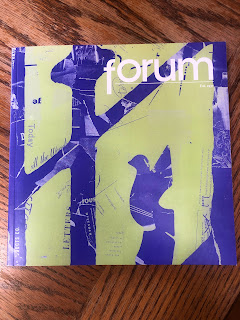 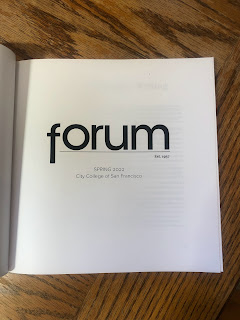 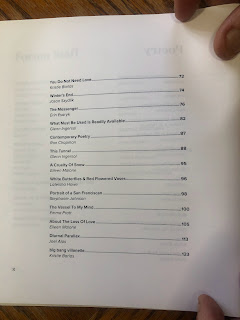 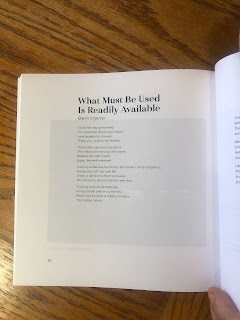 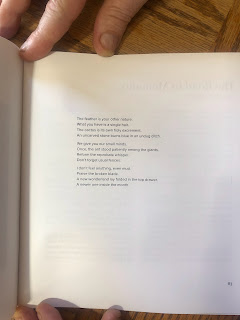 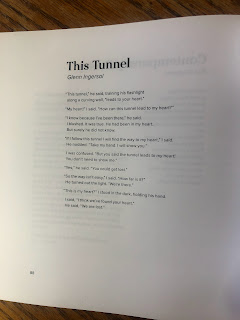 Posted by Glenn Ingersoll at 2:55 PM No comments:

Fun to be included with Marge Piercy, Ron Koertge, Stephen Dunn, among others.

I’m not sure how one gets a copy of an issue, as editor George J. Searles says he doesn’t sell them. He doesn’t even offer subscriptions. Not paid ones, anyway. He might send you one if you wrote to him and asked nicely? 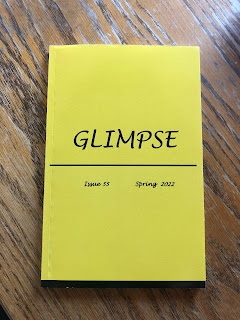 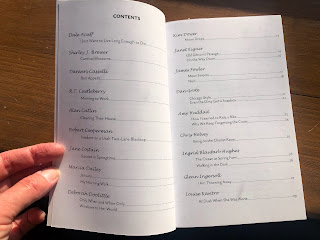 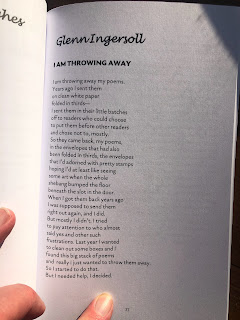 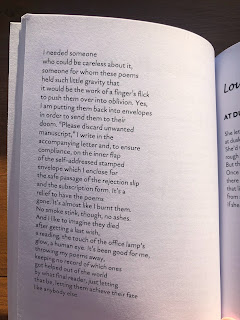 Posted by Glenn Ingersoll at 9:42 PM No comments:

“The Scent of My Advice”

“Who Stands in the Way”

“Later Than the Wish”

Plus, there’s this blog post about the poems being read.

Posted by Glenn Ingersoll at 11:31 AM No comments:

Autobiography of a Book epigraph #6

I have been collecting possible epigraphs for Autobiography of a Book. I don’t know how (or whether) I will use any of them. The epigraphs I’ve posted so far have personified books in some way. The lines below do something a little different. They address the materiality of the book and how that affects the reader’s experience.

A slight texture to the book’s first pages,

which I thought were meaningless, are now adding texture

I did my best to reproduce the spacing the poet uses.

Beauty is a Verb: the new poetry of disability

Posted by Glenn Ingersoll at 12:08 PM No comments:

Email ThisBlogThis!Share to TwitterShare to FacebookShare to Pinterest
Labels: 2022, Autobiography of a Book

“A Window” at Crowstep Journal

appears in the first issue of the new Crowstep Journal.

“Crowstep Journal is a space that explores themes around ancestry, the natural world, the extra-ordinary in the ordinary and the magic of everyday things,” say the editors.

Posted by Glenn Ingersoll at 11:55 AM No comments:

“I Am Spending Down” at Sparks of Calliope

“I Am Spending Down"

is now up at

Posted by Glenn Ingersoll at 3:31 PM No comments:

A one-line haiku appears in the issue of brass bell: a haiku journal that posted on Feb 1st.

Editor Zee Zehava runs the haiku alphabetically by the poet’s first name, so scroll down to the Gs for Glenn Ingersoll.

A haiku about peanuts appears in haiku kontinuum, a haiku ezine out of Hungary.

My haiku appears in issue #2 on page 27 (they number the pages).

Follow the link to a haiku about serving coffee.

I discovered Spillwords when a friend published there. When I looked at the submission guidelines I saw that they would consider a single haiku. I’m not sure why that appealed to me so much. Anyway, I'm glad they liked the one I offered.

Posted by Glenn Ingersoll at 11:20 AM No comments:

The editors, on how the ezine came about:

“Rejection Letters was founded in April 2020 by D.T. Robbins. It was kind of a joke at first. “Let’s publish fictional rejection letters!” Of course, this was after getting, like, four or five rejection letters in one day. Because rejection letters suck, even if they’re warranted. We all cope in our own weird ways. But then it became something else, something I’m not too sure how to describe, to be honest.”

It may have started as a lark, but it’s going strong.

“In Beauty” at flux

Fifth Wheel Press calls itself “an independent community-focused publisher of art and writing by queer, trans, and gender non-conforming creatives.”

Three poems are up at inksac:

“Things in Their Poses”

The editors at Cephalo Press describe their mission:

“At heart, we’re interested in literature that explores the highs and lows of human experience. … Our aim is to publish work that resonates with people, questions societal beliefs, pushes boundaries, and makes people think. We want to publish brave, often experimental works, that sit proudly outside mainstream publishing.”

Posted by Glenn Ingersoll at 10:35 AM No comments: